The last part of the two-week fishing odyssey ends with this trip to the 20th Elgro River Lodge fly fishing festival on the Vaal.  Setting off early from Durban I head up the N3 towards Johannesburg.   At Harrismith I turned, not because this was the shortest route, but just to be able to revisit Kroonstad.  Kroonstad was the base of the Engineers Corps. where I spent my first 6 months of military training.   That was 30 years ago.  Well, it doesn’t seem to me that the town has changed much in the ensuing years.

Out of Kroonstad, I got onto the smaller tarred roads in the middle of the Freestate. Flat, dry country that is quite sparsely populated.  I spotted several dead Barn Owls along the road. I couldn’t resist.  I carry Borax powder with me so it was just a matter of separating wings and tails from mangled bodies and bagging them.  Suffice it to say I’ve had it on good authority that these feathers make great hopper bodies.

Soon I was on dirt and crossing the Vaal river which forms the provincial border between the Freestate and the North West Province. 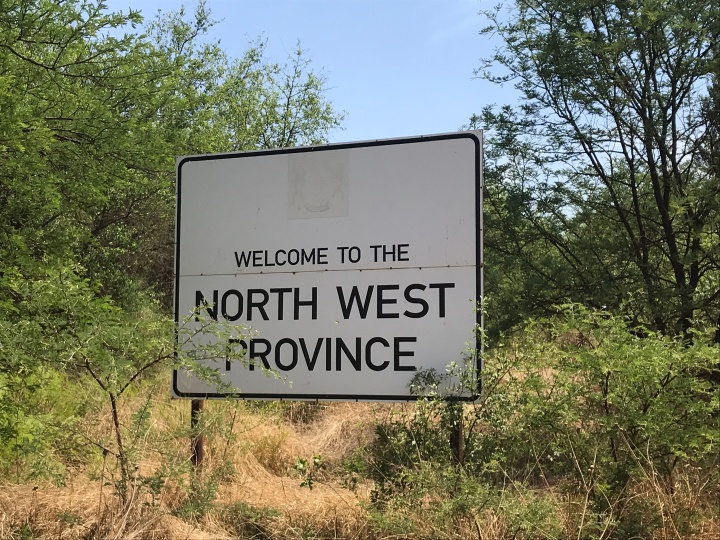 The barrage on the Vaal and the welcoming sign (Photos: Andrew Mather)

I’d stopped to take photos of the barrage and as I was getting back in the car I noticed a flat tyre.  A quick tyre change and I was on my way again to Elgro River Lodge.

We were allocated the lower drift for session 1 and 2.  Wonderful, I thought, a lovely leisurely drift down six kilometers of river. A restful lunch, catch a few fish and end off with a cold beer at pickup point. Gordon and I paired up in one Arc while Andrew Gove took up the challenge to go it alone. These Arc’s aren’t easy to paddle solo!

We launched and immediately ran into a headwind. This meant we had to paddle to go downstream. As Gordon put it “it’s like the river is flowing upstream!” We paddled for a while until we got to a section of rapids and decided to stop and fish. I think this was more to rest the arms than wet the lines.

We all hooked fish but failed to net them. Gordon had his fish run him around a rock and I had my backing  loop out of my reel and jam it…tippet popped. Things went quiet after that so we pressed on downstream.

We got to more rapids and stopped for lunch. We anchored in the middle of the river on a small island.  I hopped overboard to guide the Arc in and promptly fell over an unseen rock and got wet! Instead of a leisurely lunch we wolfed down a burger and tried to catch some fish. Well after 45 mins all I had to show was a single beautiful Yellowfish scale on my point fly.

Did I mention I hate nymphing? Flick, track, flick over and over again. How I longed for a bit of dry-fly fishing. Anyway I digress.

We paddled downstream against the headwind…..Kobus didn’t you call this a “Drift?. The Gove’s kept talking about a big rapid and large pool which held good fish and where Gordon had caught a great fish last year.

We finally got to the rapid above the pool in question. Now the two old ballies held back for advice on the route down the rapids. We got the signal to go left and down. As we enter the rapids a communication problem arises. Gordon, who was Rear Admiral, and I paddled in different directions. This resulted in us snagging a rock and coming to a stop. Despite the fast flowing water we couldn’t move. We must have looked like a real pair of old farts and in full view of the others whom were already fishing.

After a couple of minutes we worked our way free and after some team discussions we had a plan. We would re-enter the main stream and hold a straight course down the rapid.  As soon as we got going the Arc swung around and we were heading down backwards. I shat myself. I couldn’t see where we were going and initially thought we should turn around but that would put us broadside to the flow. Things happened so quickly that we managed to stay facing backwards and safely exited the rapids into the pool below. I can tell you I was relieved, my heart was pumping!

I was out that Arc as soon as I thought I could stand. It wasn’t because of the fishing spot. Poor Gordon was a great sport…he didn’t complain about the rapids incident. Well not within earshot of me anyway!

We finally got to start fishing the pool. The other two guys had caught a few Muddies and eventually decided to move on. I guess it was about 3 ish by now and suddenly things started happening. We were all fishing the seam between the fast flowing water and the pool. The two Gove’s Lads were fishing bamboo. I’d left my bamboo rod behind so I was fishing plastic.

Suddenly the fish came on the feed. At one stage we had a triple up and over about an hour several double up’s. Most fish caught were Muddies. Gordon got into a fish that just took off like a train peeling line off his reel and bending his cane rod into such a tight bend I thought it would shatter. Gordon held it back from the reeds and trees on the other side of the pool and regained some line. After several strong runs The fish was under control but still Gordon couldn’t reel it in to net it himself.

I went to his aid with my bright Orange floating Explorer net. My mate Rob Hibbert told me to bring this net as it’s the largest I own. Well the net was just big enough to net the massive female Yellowfish. I can safely say that Gordon’s fish was the biggest Small Mouth Yellowfish I have ever seen. I estimate it was 29” long and between 9 and 10 lbs.

After it was safely netted the fly was removed and the guide took her out the net to revive her. Gordon was still making is way over to us gather around my net when with a flick of her tail she was gone! I felt for Gordon. He goes and catches a fish of a lifetime on his own handmade cane rod and there would be no photographic evidence to verify the size. Just the memory of  a trophy Yellowfish that will live on in all our minds.

Andrew and Gordon Gove fishing the pool with their bamboo rods

We got back in line along the current seam and in no time I went tight into a solid fish. I fought her for about 5 mins while she tried running into the current and across the other side to the trees. I eventually netted her, a large small mouth Yellow. It was definitely my personal best Yellowfish.

We all went on to catch several fish from this pool before heading down to the collection point. I picked up a barbel in the tail of the pool so I chalked up another new species on fly. There are really big fish in the section and one of the other lads drifting this section told of his 6 weight rod shattering in two places fighting a fish.

Next morning we had the beat upstream of the Lodge. We arrived at the beat to see many large Yellows and Carp patrolling the pool. Andrew Gove decided to concentrate on trying to catch one with Keith Falconer, who was our guide for the day. I proceed to try the current seam on the other side of the pool and hooked a nice Yellow before I had to pack up and head back to Durban.

In summary, Elgro River Lodge offers some amazing Muddies and Yellowfish angling. Kobus and his team bent over backwards to make our stay enjoyable. Nothing was too much trouble. I’ll definitely be back next year, that is if the Gove lads will allow me.

3 thoughts on “In pursuit of Bars of Gold: The Riet, Orange and Vaal Rivers – Part 3.”

This is a text widget, which allows you to add text or HTML to your sidebar. You can use them to display text, links, images, HTML, or a combination of these. Edit them in the Widget section of the Customizer.