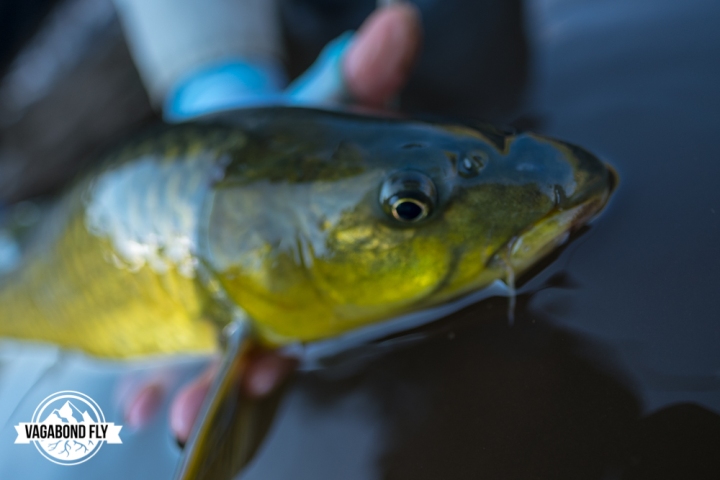 For some time I’ve been lusting to go fish for the yellows (Labeobarbus aeneus) in Lesotho. Travelling into Lesotho on a solo trip is difficult unless one has been given the complete run down of what and where to go. So an organized trip is the way to go especially the first time.

Anyway an opportunity came up to travel with Tourette’s Flyfishing to their camp on the Bokong River. This is just above the Katse dam, which incidentally supplies water to South Africa. My fishing buddy for the trip was my GP, Mike Nelson. Mike has been mostly a Stillwater fisherman and this would be his first major trip on a river of this size. We spent many hours discussing fly choice and equipment requirements in keen anticipation of the trip. 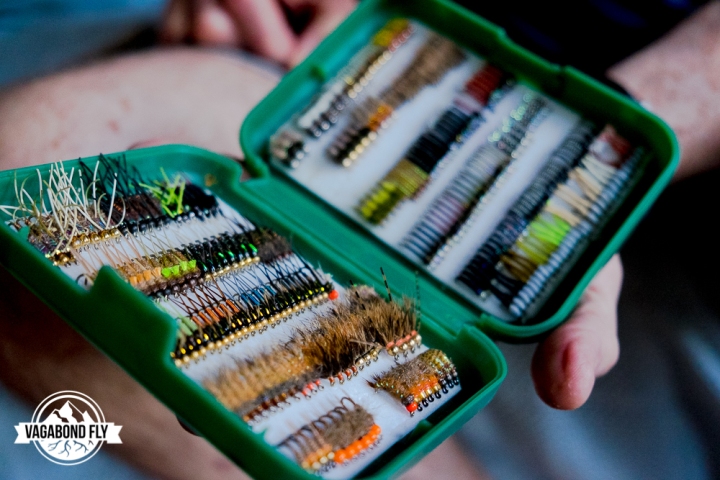 The day finally arrived and we set off from Durban early before sunrise on a trip which would take us from sea level to over 2000m (6000 ft ). The first leg of the trip was on good tar roads leading through Pietermaritzburg and out on the Underberg road passing the sleeping towns of Boston and Bulwer. At Underberg we turned towards Sani Pass. This is one of the most spectacular passes in South Africa cut out of the escarpment between South Africa and Lesotho and forms one of the few routes across this mountain range.

After passing through the South African border post we were now on a relatively narrow dirt road and in low range. Sections of the road was just rock, put down to hold the surface intact during the rainy season. Passing was always interesting as often only one vehicle could pass. This meant the descending vehicle had to find a spot to pull over while the ascending vehicle, labouring upward had right of way. We saw an assortment of vehicles, many you would not credit with being able to get to the top of Sani. We steadily climbed upwards with one switchback after the next until we squeezed thought a narrow gully at the plateau. Looking over the sides as we were climbing we saw several rusty vehicle remains littered down the slopes around the road. Cresting the top we were met by a moonlike landscape, cold and windswept with very few trees and lots of rolling grassland. A short stop to pass through the Lesotho border post and chance to stretch legs saw us once again on the road. Incidentally the highest pub in Africa is located here…some 2753m above sea level.

The road changed from the dirt track we had come up to a brand new two-lane asphalt highway recently completed by the Chinese. It was a pleasure to get off the bumpy dirt pass road. We made good time to Katse dam. This dam was built as a joint venture between South Africa and Lesotho so that water can be transferred across catchments into South Africa. Driving around it we saw a number of floating fish farm that we were later told held trout. Apparently somebody cut the nets in one of these pods releasing about 80 000 rainbow trout into the dam. I wonder what that will mean for the fishing in the rivers that flow into Katse dam. We arrived at the Makhangoa Community Camp after nearly ten hours on the road.

The camp is located on a spur above the Bokong river. To the east one looks down into the start of the dam. Normally when the dam is full this forms the estuary as the Bokong flows into Katse. Here the big Browns and Rainbows, up to 15 lbs, gather in April/May to run up and spawn. The view west is over home pool and the start of the Bokong river. In February/March this is the prime yellowfish season where thousands of yellows start moving up to do their thing.

The camp consists of several rondavels for guests, an outside toilet/shower block, a main dinning room lounge cum bar and a dormitory for the guides. All appointed with sufficient creature comforts for a bunch of flyfishers. We had three guides, Stu, Johan, Brent with Colin from Tourette making up the Tourette team. In addition to Mike and I, we had two chaps from Mpumalanga and a father and son team from Gauteng. Setting up the rods that afternoon the low rock wall in front of the camp had the cutest ice rats scampering around in amongst the rocks. They would come out foraging for food. Mike set up his rod with a brand new floating line against the wall. After fussing about in the bungalow for a while he came out to tie on his leader. The ice rats had nipped off about 2m of his floating line. They must have thought it was edible!. Oh by the way Mike later told me it didn’t make any difference to his casting.

First morning we went downstream. The dam was a bit low so we fished the section that ordinarily would be flooded by the dam. The Tourette guys call this the “Aquarium”. As we walked over the pedestrian bridge it became self evident. Looking down from about 30 m above the river, as far as the eye could see were yellows. I guessed about 200 fish per 200m2 of river, so on average one fish per square meter of river!. But they weren’t evenly distributed so it’s hard to be too exact so I could be exaggerating a bit. They were in pods everywhere in the streambed. A large single female being jostled and pursued by between 4 and 8 smaller males…sex was clearly on everybody’s brain. The French have a great expression for this “Menage a trois”, but here there were many more suitors.

We split up into two’s with a guide. Mike went with the guide while I fished a large pool just downstream of them. Dry fly barbless only. The community had a river ranger who’s job it was to chase away locals fishing in the areas were Tourette had water and to check everybody was using barbless. I got picked out early on for fishing a barbed fly. I rigged up a single elk hair caddis and waited for passing fish. A short cast in their path would result in several fish accelerating ahead to intercept the fly. This went on for the best part of two hours until I can honestly say I stopped fishing, not because of a lack of fish, but the old arm was taking strain!. Mike in the meantime was getting a crash course on river fishing for yellows. I walked up and joined Stu and Mike. We fished side-by-side hooking many of the yellows in the riffles. Once hooked, these fish take off at high speed, literally peeling line off your reel. We didn’t have too many cross over’s but spent an hour having great fun stalking and trying to target the bigger females in the pods. We returned to camp for lunch.

After lunch we relaxed and eventually headed down to the river below the camp. Here the river is deeper and sight fishing to the yellows was a little more difficult. After trying dry fly’s I switch to a New Zealand rig with a small nymph and started picking up the odd fish. I wasn’t as easy as the morning session. We fished up the river around the bend and at last light we headed up the hillside to camp for a well-earned dinner and drinks. Tomorrow we were heading upstream some 10 kms to fish what we were told was far more technical fishing than what we had experienced so far which I’ll write about in Part Two of this adventure.

This is a text widget, which allows you to add text or HTML to your sidebar. You can use them to display text, links, images, HTML, or a combination of these. Edit them in the Widget section of the Customizer.